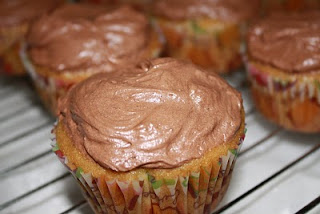 I'll be at Vegan Drinks in NYC tonight where we're having a bake sale to help the relief effort in Haiti.
Posted by Jenn at 7:23 AM 2 comments:

Veganism is the new tastes like chicken was in the vanity card from an episode of the Big Bang Theory earlier this season. I still think it's funny...and totally appropriate for tonight's dinner.

I know there are two camps of vegans. The ones who are grossed out by the mere mention of fake meat and the others who wish everything tasted like bacon. I think you know what brand of vegan I am. So, if you're tired of eggplant Parmesan and want some chicken Parmesan that tastes like chicken parm I highly recommend trying some Gardein Tuscan breasts. No joke. Tastes like chicken. I assure you, no chickens were harmed in the making of this dinner. 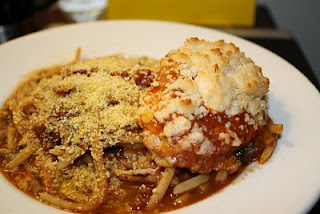 I topped my Tuscan breast with some cheezly mozzarella that I had shredded and frozen for just such a needs-to-be-topped-with-cheese occasion. You can't really tell from the photo, but the cheezly isn't exactly "melted" but it is soft and melty. This was good since it stayed on top of the Tuscan breast and even got a little browned on top. The pasta is a nice dried Italian pasta. Worth the extra few bucks. Homemade sauce and the topping on the spaghetti is a mix of pine nuts and nutritional yeast. It's really quite yummy.
Posted by Jenn at 8:28 PM 11 comments:

Had a lovely brunch at Counter in the East Village yesterday afternoon. 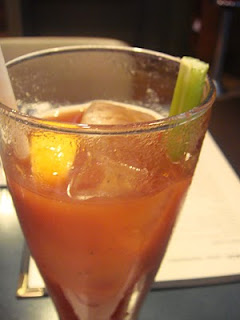 This was the Mean Green Mary. Despite the dandelion greens and other good for you additions, I think I got a little tipsy. 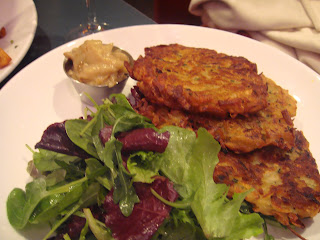 We shared the potato latkes. The condiment was a pear compote. Fried potatoes. So scrumptious. 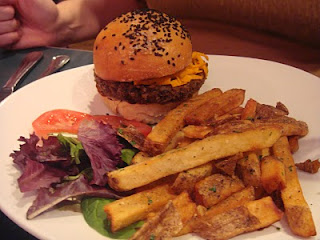 This was the East Side Burger. Seitan and mushroom pate with some soy cheddar on top. Tasty, but kind of fell apart a bit when you took a bite. Eh, who cares, it's one of the better flavored veggie burgers I've had in the city. 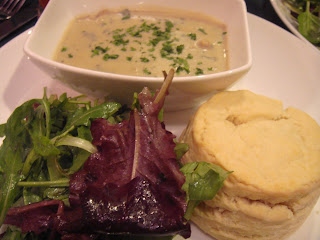 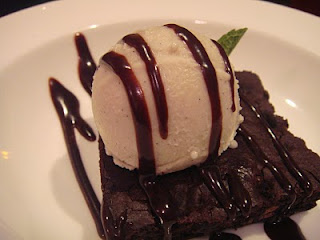 And what's brunch without a little dessert? This awesome brownie a la mode features a vanilla nut based ice cream. Yum!

I found Volentia through a facebook group and it's a whole networking site just for vegetarians. You can designate your vegetarian level, join the vegan group, and pimp your veggie blog . Yeah, I know yet another social networking site to keep up with, but hey it's ALL vegetarians, so it's pretty freakin' awesome.

Also there's vegblogs which searches for the latest in vegan blogs. You'll recognize some old blogosphere friends and maybe find some new ones.

So the pantry isn't really a pantry, it's a closet next to the kitchen that holds all my tangible vegan resources so I can make chickpea cutlets, chocolate cupcakes, or anything other recipe from my stack of vegan cookbooks without having to make a trip the store.

In case there is ever some world catastrophe that leaves us all living like we're in The Road, you know where to come. Here's the pantry in piles on my living room floor. Hey, at least now it's organized. I'll be featuring some of these staples more this month. Now let's see, what to do with barley.... 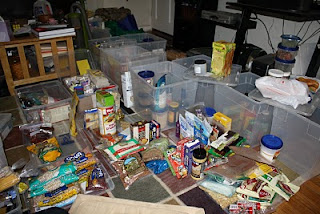 I'll also be at Vegan Drinks this month making cupcakes for Haiti.

You can't really see it in the photo, but this awesome vegan hat has HEADPHONES in the ear flaps. Guava makes a rockin hat. Check out her etsy site Late to the Revolution for more earphone hats and headbands. 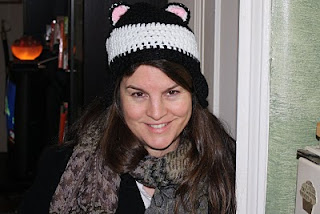 Mmmmm banana fronch toast (you have to say it in the voice of the mother from Better off Dead for that to be funny.) 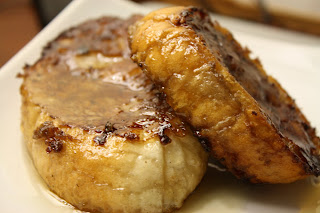 I picked up a baguette from Hot and Crusty on my way home from work (yes, I was working at my new job on a Saturday. These darn accountants and their year end closing schedules...) and the baguette was a little more crusty than hot. Perfect for French toast! Now I'm twice inspired by the vegan crunk for this recipe because I wanted to make her tester French toast, but I turns out I didn't have any tofu. So I had to figure out a way to make a nice thick batter for it. Then staring me in the face is one over-ripe banana in my kitchen. Perfect. Now here's the second crunk reference. Bianca has given up coffee for a cleanse, and well, I couldn't help putting a tablespoon or two of coffee in with the mashed banana. Coffee and banana just go together in baked things. Also there's no cinnamon because the Ninja would freak out if he even smells it, so I added some other spices that go with banana breakfast things.

Heat a cast iron skillet with a nice coating of oil.
Mix batter together. Dunk in bread slices and flip to coat.
Place in skillet. Cook 3-4 minutes then flip and cook another 3 minutes.

Enjoy with some nice maple syrup. Mine came from Black River, NY.
Posted by Jenn at 5:36 PM 9 comments:

Once again, nothing warms up the house like a 400 degree oven. A pot of broth simmering on the stove can add some much needed humidity to the dry winter air as well. I made some practically freegan broth and roasted some veggies for a light and delightful pureed roasted butternut squash soup. 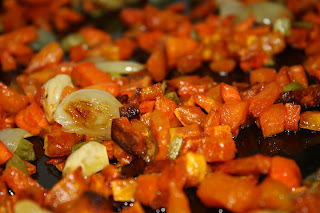 The roasted veggies are diced butternut squash, carrots, celery, leek, shallot, and garlic. Coated in olive oil and roasted in the oven. I like the small dice because it gets nice and crispy. 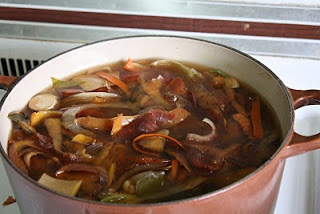 The broth is some sweet potato peels that have been frozen since thanksgiving and the rest is from the veggies I'm roasting. Some shallots that were fresh from the farmer's market last spring and their skins, the peelings from carrots, the tops and bottoms of the celery and leeks, and the peel from the butternut squash. I added some bay leaves and kombu. 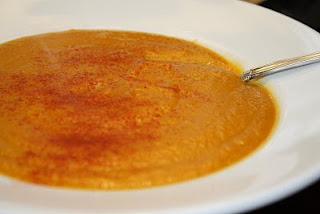 Blend the roasted veggies together with the broth and voila, perfect roasted butternut squash soup. I topped it with a little paprika, but other than that I didn't add any herbs or seasonings (or salt) and it is wonderfully flavorful.
Posted by Jenn at 2:16 PM 4 comments:

Black eyed peas and collard greens for the new year

OK, this is no traditional recipe, but every year I come up with some excuse not to make black eyed peas on New Year's Day. This year I dug through the pantry and came up with both a can of black eyed peas and a can of collard greens. Sure fresh would be better, but hey sometimes you've got to improvise. 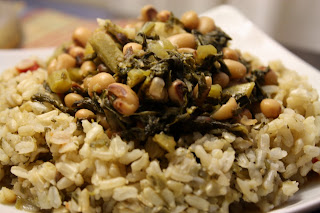 Make a pile of rice and serve with beans and greens on top.

Lots of luck for a happy new year!

*I use a fancy rice cooker which I love even more than my vita-mix. I know you can cook rice for free with a pot on the stove, but with the rice cooker all you do is put in rice and water and turn it on. It beeps when it's done. You can even leave it on for hours after it's done and the rice stays warm and perfect. I also don't have a microwave, so it warms up rice that's been in the fridge to perfection.
Posted by Jenn at 4:12 PM 1 comment:

My neighbors made this awesome vegan bundt cake for their new year's party. I'll have to to get the recipe. I'm eating it for breakfast... 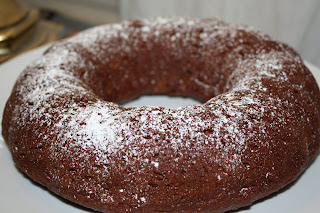