The theme ingredient for the 4th Veggie Conquest was potatoes. I threw down with a whole mess 'o loaded baked potato perogies. Vegan update of a comfort food classic. The perogis are stuffed with baked russet potatoes (with the skins), tempeh bacon, broccoli, leeks, daiya cheddar cheese, and tofutti better than sour cream. They are topped with tofutti sour cream and chives; and shallots sauteed in Earth Balance. I couldn't find fresh chives anywhere, so there's a little parsley for garnish. 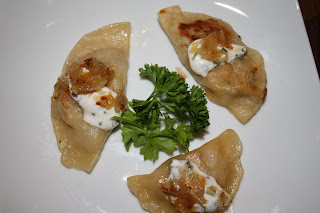 Veggie conquest is always really fun and the food is always amazing. Following the tasting, we had a buffet dinner of dishes made by the volunteers featuring Match Meats. One of which was a beefy noodle casserole that was quite like school cafeteria beef-a-roni, in a good way. Match Meats gave all the guests a sample to take home, so lets see what I can do with some vegan ground pork! 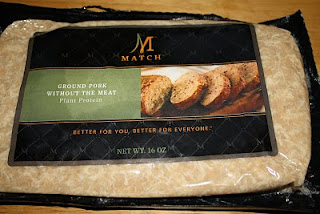 I forgot to grab a menu, so here are the other veggie conquest entries with descriptions as I remember them: 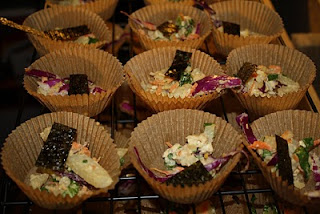 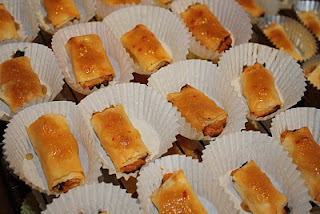 Second place and the taster's choice was these sweet potato cigars made with filo dough and a sweet sauce. This one was a great balance of sweet and savory. 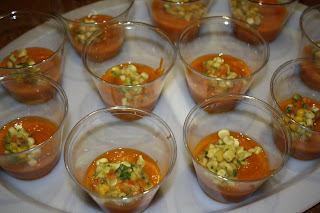 Third place went to this lovely sweet potato and corn soup. Great smoky and spicy hint of chipotle.
Honorable mentions were my perogis, and these: 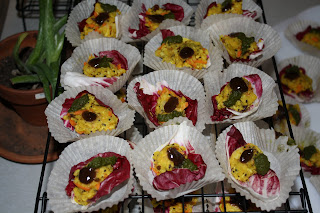 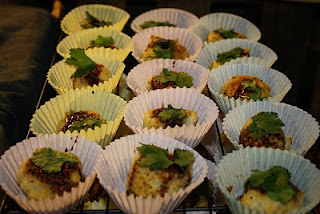 These potato bites had a really interesting tamarind sauce and I love cilantro.
All in all another totally fun vegan event. Here's the recipe for the perogi. The ninja powered down quite a few, so this dish is officially omni-approved

Remove the peel from the potatoes and chop into small pieces. Mash potato insides with the sour cream and add all other ingredients. Mix it together well, so that every 1 tsp bite will get all ingredients.

Crumble tempeh into a sealable container and add liquid smoke, vinegar and soy sauce (you don't really have to measure.) Let marinate a few hours to overnight. Heat canola oil in skillet, add marinated crumbles and cook until browned and crispy. Add some bacon salt or pork chop seasoning if it needs a little extra bacony kick.

Mix together to form a smooth ball. Add extra flour as needed so dough is not sticky. Refrigerate for 1/2 hour (up to overnight.)

Break off about an eighth of the dough and roll out thin. I used a pasta roller to number 5. Cut into circles with a drinking glass or pastry cutter. I used 2 1/2 inch diameter mason jar so they were about two-bite sized. Brush with soy milk (OK, I had a little dish and I just dunked one side in.) Fill with 1 tsp filling and fold in half sealing the edges.

Boil for about 2 minutes. Drain and saute in Earth Balance and canola oil until crispy. I found that with just Earth Balance they stuck to the bottom of the pan, so I added a little canola oil and that helped.

Serve hot and top the perogis with the sauteed shallots and the sour cream and chives.
Posted by Jenn at 8:42 PM 7 comments: 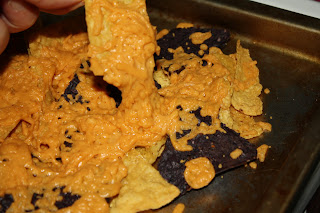 I picked up some Daiya at the Whole Foods in Union Square. Check out the Daiya website for a location near you or the online stores selling it. It's in real packaging now and word is they're rolling it out at Whole Foods around the country. 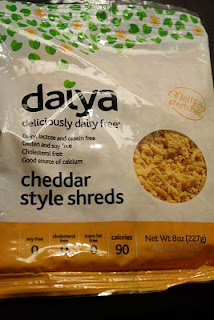 Daiya is definitely different than other non-dairy cheeses. It tastes good, melts well, and when melted has the same stringy texture and mouthfeel as real cheese. I find it to be kind of buttery tasting. Yum. I think I'm going to go make some more.
Posted by Jenn at 8:35 PM 5 comments:

Well I made it off the couch and out to TWO vegan events here in Westchester, NY this afternoon. As much as I love the vegan events in NYC, sometimes it's nice to stay close to home.

This morning I went to a vegan brunch hosted by Doreen and the Vegetarian Social Network of Westchester at Rain Water Grill in Hastings, NY. A mere 12 minutes from my house.

Although the Rain Water Grill is regularly vegetarian friendly, they made a special vegan brunch for our group with appetizers and entrees. 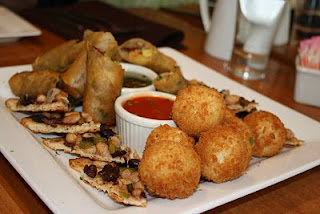 We all shared appetizers of fried risotto balls with marinara; vegetable flat bread pizzas with cannellini beans, leeks, and black olives; and egg rolls with eggplant, squash, onion, and carrots with a delicious soy cilantro vinaigrette. 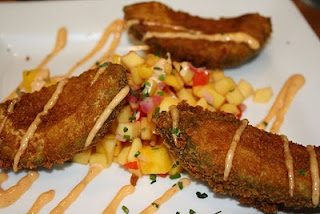 I got the fried avocado and the mango salsa was lovely. Everyone else was nice enough to let me stick my camera in their food and get a sample as well. You know, for the blog... 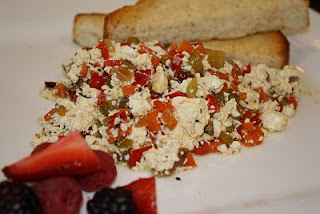 Tofu scramble. This was really nice on the toast. 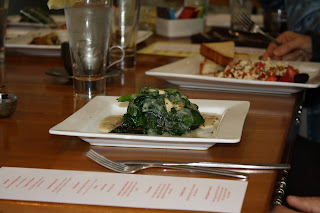 Stuffed portabella mushroom. I didn't actually try it, but it looked yummy. 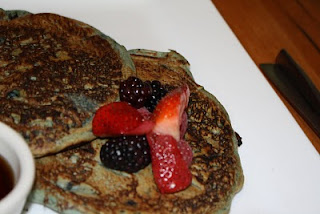 And the hit of the day were the blueberry pancakes. Someone was cool enough to order a second helping which we all shared. The manager said even though it's not on the menu they would be able to whip these babies up for brunch anytime and even offered to send someone out to the store if they needed the soy milk for them. That's some vegan love. 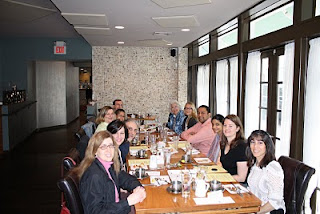 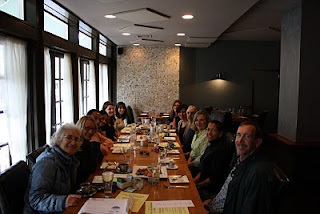 We had about 12 people in all. Great group of people and a fun brunch event.

Now, I could have just gone home and vegged out with some nice Jonny Lee Miller period pieces (Emma and Mansfield Park or perhaps Byron in case you're wondering...)

but instead I ventured out to the store to pick up some provisions for a pot luck dish for an evening with Farm Sanctuary Campaigns Coordinator David Benzaquen which was kind of with The Westchester Vegan & Vegetarian Meetup Group, though it wasn't an official meet-up. 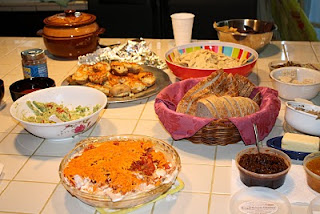 The Mexican dip is the one near the front of the photo. When I was 23 and vegetarian, this was what I brought when I needed to bring a dish somewhere. I usually make it with vegan cream cheese and vegetarian chili, but this time I used vegan sour cream and refried beans. It's very flexible to substitutions and always awesome.

Mexican Dip
1 package Tofutti sour cream
1 can vegetarian chili or refried beans
1 container of salsa ( I used the fresh kind from the fridge section, but jarred is OK, too)
3/4 block follow your heart cheddar or enough vegan cheese to cover the top

Layer the ingredients in a pie plate in the order listed.

I usually pop in the oven at 350 for about 20 minutes, but this heated up really well in the microwave in about 8 minutes. The cheese got melty without getting dried out. 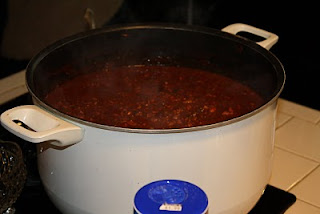 Trista made a giant pot of chili with Quorn. (This would have been awesome in the Mexican dip.) 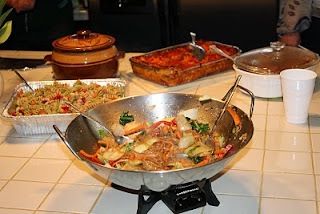 Trista's mom made this amazing noodle dish with those clear noodles used in Jap Chae. I don't remember the name, but this was lovely. 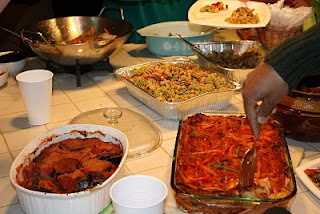 Megan made an amazing lasagna.

Here's everyone hanging out enjoying the food and chit-chatting... 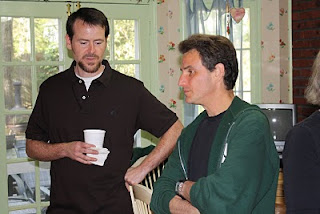 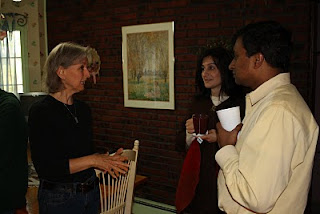 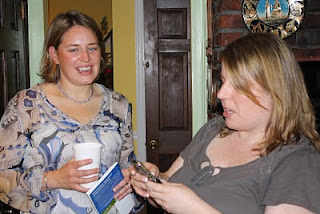 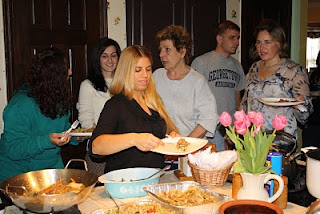 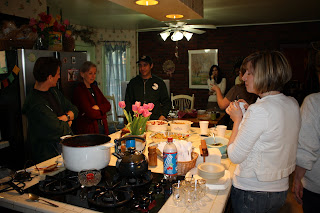 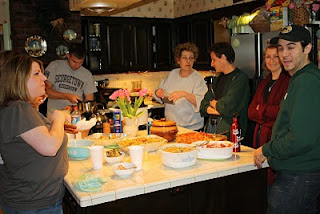 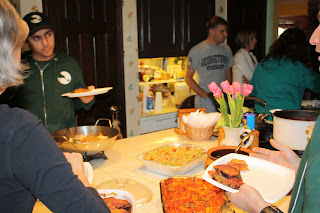 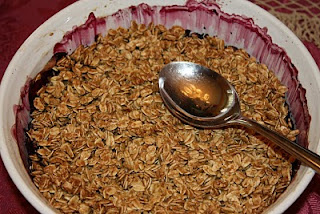 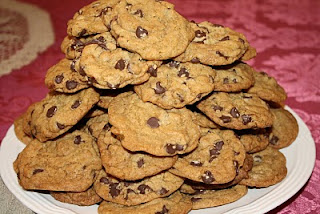 And just when I thought I couldn't possibly eat anything else, I just HAD to have one of these fantastic chocolate chip cookies. Trista used EnerG which for some reason I never try and they were chocolate chip perfection.

David gave a nice presentation on what the Farm Sanctuary is all about and this sparked some lively discussions with the few non-vegans in the group.

Thanks so much to Trista and her family for hosting this event (8 minutes from my house.) It was beaucoup fun and hopefully we'll have more events here in Westchester so I won't always have to schlep into the city on a weekend for a vegan fix.

Today I also found out the secret ingredient for the Veggie Conquest next Sunday is potatoes. It has to be an appetizer and I'm trying to think of things I could serve to 80 people that would warm up easily in those catering foil trays with the sterno. One of the guest judges is Alexandra Jamieson who famously slimmed down her hubby Morgan Spurlock after he ate nothing but McDonald's for 30 days in the documentary Supersize Me. Wish me luck. I'm gonna need it.