I picked up this well hung daikon radish at the Farmer's Market in Lewes this morning.
The daikon was quite a bargain at $3.  It took up half the back seat.  I'll make something Japanese with it tomorrow. 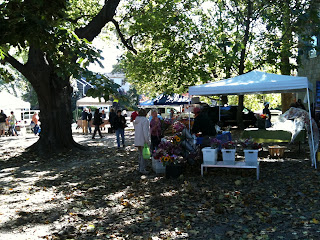 The Lewes Farmer's Market.  Nestled in the wooded grounds of the Historical Society in downtown.

Now I'm headed to my High School reunion like Zach & Miri and Romy & Michele with a little Grosse Point Blank.
Posted by Jenn at 5:17 PM 5 comments:

I was grabbing a few vegan Kashi frozen meals for the office when I spied a familiar logo at the bottom of the Whole Foods freezer.  Can this be?  It's Candle Cafe's seitan piccata in frozen form! 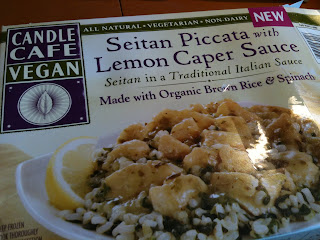 I made it for lunch today.  I don't have a microwave at home, but they're pretty darn handy at work.  Five minutes later, I enjoyed my haute cuisine at my desk. 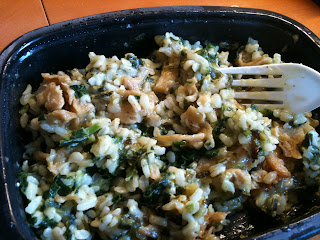 Sure it's no substitute for the lovely ambiance of Candle Cafe or Candle 79, but as far as freezer food goes this was DELICIOUS!  At only 210 calories, this is some serious lean cuisine.  I think they're usually about $6, but they were 2 for $9 with $1 off each coupon, so I got a super deal going on here.
Posted by Jenn at 8:49 PM 4 comments:

Mofo 3 - OMG the awesome juicer is the funnest invention ever!!

Sure it's a little messy, but it's so freakin' fun!  I almost feel bad for the vegetables as I smash them to their doom.  If you have the means and want to make your own juice, definitely spring for the uber fancy model.  It's easy to clean you can make a whole lot before it needs to be cleaned out.  You don't even have to cut the vegetables up that much. 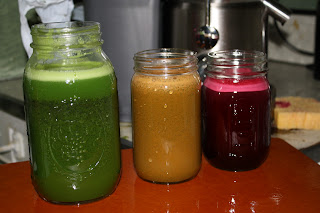 Left is super green with kale, spinach, celery, apple, parsley, lemon.  Middle is carrot, apple pear.  Right is all beet.  I'll probably mix them together, but they're so pretty alone!
Posted by Jenn at 11:20 PM 4 comments:

The vegan month of food blogging has arrived!  This is my 4th year participating and I've got a few things going on.

First off I bought a juicer yesterday.  I haven't gotten the thing out of the box yet, but I'm getting ready to give it a whirl.  Just because I like to go all out on my gadgets, it's the super awesome one.  The good ones range from $100-$500. 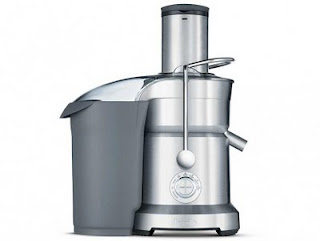 Here's the why and I'll follow up with the how it's going and what I'm making.

A.  I don't fit into my pants.  I got a new job with an awesome driving commute.  The downside is that I don't walk anymore as part of my commute.  I also miss the awesome fruit carts outside my downtown office where I would get fresh fruit and vegetable juices everyday.

B.  My husband (a.k.a. the ninja) has been watching what seems like every streaming video documentary on Netflix.  On his own he stumbled on the man-movie Sick, Fat, and Nearly Dead and decided he wanted to add more nutrients to his diet.  Knowing he's not going to power down several plates of vegetables each day he figures he'd be more likely drink the vegetables.  The ninja still insists he's not going to be vegan and doesn't want to look like Moby (sorry Moby) but after watching Joe Cross (the guy in the movie) and Phil (and the trucker guy he meets) get healthy, the ninja is motivated to make some healthy lifestyle changes.  He doesn't need to or want to actually lose weight, he just wants to get more nutrition.


Yesterday I headed into the city to get my hair cut and stopped at a juice cart in Union Square for some veggie juices.  If you're in NYC, definitely look for the fruit carts.  You can get veggie juices, smoothies, and fruit bowls for less than $5.  It's the best bargain in town.  I was running a few errands, so I ended up going back two more times before heading home.  I was surprised that after only having 3 large vegetable juices, by 4pm I wasn't totally starving.  I had a snack, then brought the ninja to Andy's Pure Food in Rye.

We had a Green Monster and an Iron Maiden.  He didn't like the Iron Maiden, I think because it had cilantro in it.  I thought was good.  He liked the first few sips of the Green Monster, but then thought it had too much cucumber and tasted like pickles.  He drank about half.  He wants to make his own blend to find something he likes.  I think he's just got more taste bud adjusting to do than me, so we'll experiment.

Now off to Chef Central to pick out a juicer.  Everyone seems to recommend the Breville juicers which come in a range of prices.  After deliberating we went for the more power, easier to clean, and more metal parts option of the top of the line model.  It's pricey, but I use my accounting skills to amortize the costs.  If I use it everyday for just over a year, that's only $1 per day.  Then it's free for the rest of it's existence!  And I won't need to buy new pants.

I picked up my CSA veggies this morning, and I've got really fresh beets, kale, apples, peppers, and carrots.  So I'm off to experiment!