No dissin' the Quinoa

If there isn't pent up sibling rivalry over Thanksgiving then what's the point?  My fancy chef brother Travis - of Spoons Bistro* in Victor Idaho nestled in the Grand Tetons near Jackson Hole Wyoming - is not a fan of quinoa.  His argument is basically: Why bother with quinoa; I'd rather make risotto.  Point taken, but despite having a nice bag of organic quinoa sitting unopened and lost in my pantry for probably about a year, I felt the need to defend this little grain, because I actually like it.

I tried quinoa long before it was popularized by the gluten-freeists.  It's ridiculously easy to cook, just add water at a 2:1 water to quinoa ratio, boil, then cover and simmer 10 minutes.

I just got back from vacation in the aforementioned Jackson Hole area and I haven't gone shopping yet, so I decided to tap into the five day meal box I have on have hand for emergencies thanks to Vegan Unplugged.   There's a lovely recipe for a Quick Quinoa Pilaf that was the base for the dish.  I had a few Thanksgivingy looking acorn squashes that were also begging to be stuffed with something.  I recently had a similar type stuffed squash shepherds pie kind of dish at a meet-up at Sweetgrass Grille in Tarrytown for Meatless Monday with blogger friends JL and Jodie. 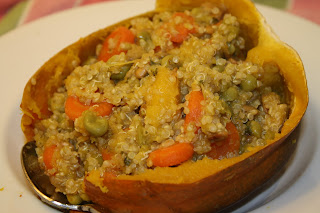 Kind of a side dish**, but excellent as a meal in itself.  Quinoa stuffed squash fit the post thanksgiving craving and reminded me that I do like quinoa for more than just argument's sake.

1 acorn squash, sliced in half, seeds removed and roasted about 45 minutes at 350 degrees.

Scoop out most of the flesh from the cooked and cooled squash halves, leaving the skin shells intact, give it a rough chop, and add to the quinoa.  Season the quinoa mixture to taste with salt and pepper.***

Add quinoa mixture back to the squash halves and warm in the oven at 350 degrees for 10 minutes or until ready to serve.

*Like most fancy chefs, Travis will happily make you an awesome vegan meal at Spoons, especially if you tell him that his sister said he couldn't do it - just don't expect quinoa.  He changes the menu regularly, but the Spaghetti of Zucchini is fantastic and the black bean burgers are a delicious menu staple.

**I had a friend ask via facebook for a vegan Thanksgiving side dish and I did not do a fair representation of all the interesting potential vegan side dishes.  This one's for you Sarah.

***Because I used bullion, canned veggies, and salted sunflower seeds, I did not add any additional salt.