Yeah I've made bean cutlets before, but I've cooked so little blog worthy stuff lately, I had to throw them in again.  So much easier than going the whole boil-or-bake seitan from scratch route.  I use the v-con chickpea cutlets as inspiration, but they're never exactly the same twice.  Key ingredients are beans, wheat gluten, and salt.  Otherwise it's fair game for flavors.  I like black eyed peas because the bean is pretty flavorful on it's own.  I cooked some from dried awhile ago and froze them in 1 1/2 cup portions expressly for this purpose. 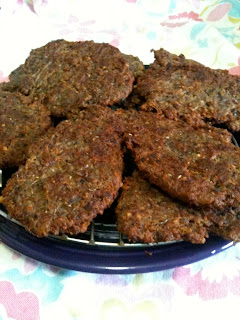 Blend the beans with the soy sauce, olive oil, chopped garlic, seasoning, and broth.  Pour into a medium bowl and add bread crumbs and wheat gluten.  Mix with your hands and knead for a minute or so until it forms a large stringy dough ball.  Break off into pieces slightly larger than a ping-pong ball and flatten with a rolling pin (or wine bottle.)  Heat skillet (cast iron) with 1/4 inch oil.  Fry until golden brown.

Now the possibilities are endless.  Sure you can season these to what you're making, but I've used similar seasoned cutlets in everything from cutlet parmigiana and burritos to sandwiches and sushi rolls.

Right now, I'm just eating them off the cooling rack...yum. 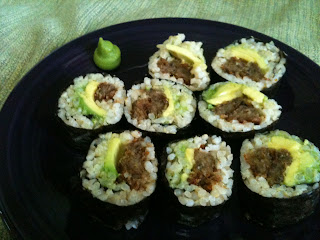 Updated with cutlet and avocado maki.  I couldn't find the bamboo roller, so here's proof that you can use parchment paper in a pinch.  A clean dishtowel works, too.
Posted by Jenn at 4:45 PM 1 comment: