Oh heck yeah. The judges liked me. They really like me! The secret ingredient for Veggie Conquest 5 was basil and I threw down with an entree of some Basil Eggplant Ballz. Most everything came from the farmer's market or my CSA and was organic. Pretty meaty for a bunch of vegetables.

I made two sauces. A roasted red pepper basil sauce and a creamy walnut pesto. I enlisted the help of the Ninja* in deciding on the sauce. He liked the pesto, but I had just spent all this time roasting peppers over the totally safe open flame of my gas burner. I tried mixing them together, but it was a weird light brownish color and didn't really do either sauce justice. So in the end I served it with both sauces. I think that worked out.

I totally forgot to get a photo earlier, so this is from the taster judging table and had been sitting around for awhile. I swear it tasted super awesome. 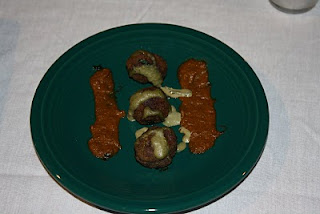 Blend roasted eggplant with olive oil, basil, salt, dried basil, Italian seasoning, and water. You can leave it chunky and it will be eggplantier or really smooth and it is meatballier. Those are real words.

Transfer the blended mixture into a medium mixing bowl and taste for seasonings. Add wheat gluten flour and bread crumbs. Mix it with your hands until it comes together then knead for a minute or so in the bowl. It may be really squishy at first, but you'll start to feel the gluten strands coming together as you knead.

In a cast iron skillet heat up a 1/2 inch of canola oil. Scoop out about a teaspoon for mini balls or tablespoon for bigger balls. Roll into a ball and pan fry on all sides until golden brown. Transfer to the oven to keep them warm.

Roast red peppers carefully over the flame of a gas burner, in the oven, or on a grill. When the skin is charred, wrap in a paper towel and place in a plastic bag for about 15 minutes. The skin will peel right off. Cut off the top and pull out the seeds.

Blend everything together until smooth. Serve meatballs in the red pepper sauce and top with pesto sauce.

Now for the rest of the Veggie Conquest chefs...

First place went to my buddy Cathy who has twice hooked me up with some wine at the Veggie Conquest. 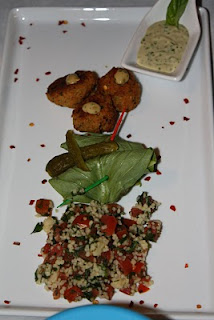 Thanks Cathy and your dish was super awesome. This rockin' mezze plate featured some basil falafel. Everything was perfectly cooked and the flavors were well matched. Totally yum. 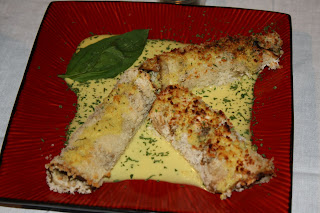 Third place was an eggplant rollatini with a coconut sauce. There are 2 ways to go with basil. Italian and Thai and this one rocked them both. 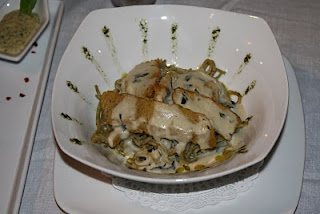 Father daughter team made a terrific spaghetti and seitan dish. The seitan had a perfect chewiness and the chef said he both boiled it, then baked it. Whatever he did it rocked. 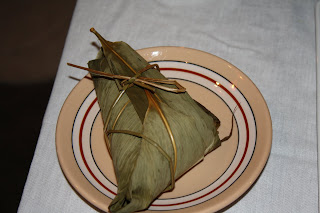 I love sticky rice and this dish was perfectly cooked and seasoned. The bamboo wrapper is how it's cooked. Inside is the sweet sticky rice concoction. 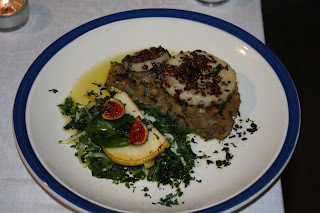 There was a whole lot goin' on in this dish. Lentils, tarot, I think a pear, and some fig. Really interesting blend of textures.

Everyone rocked and it was another jamin' Veggie Conquest. With tunes from Lil Ray and MCing by the Discerning Brute Joshua Katcher. Thanks to the organizer Jessica for another great event.

* The Ninja (aka my husband) has expressed that he wishes to be known henceforth as "the secret ingredient" - I really need a secret code name...

congrats on your win! your creations sound awesome -- i can never get enough basil.

Can one volunteer to be a judge in next year's veggie conquest? :) lol the dishes look absolutely delish. Many congrats on a well-deserved second place, looks yummy for sure.

Oh, I must make this- I have so much eggplant right now! Congrats on your awesome dish- I wish we had a VC where I live!

I made the eggplant ballz, Jenn! They are so so good! I went with the eggplantier option, and I loved the texture! I blogged about them today :)